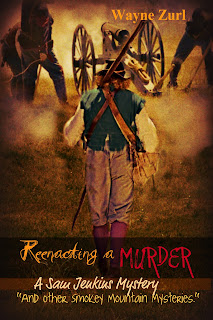 This is three separate photos. This is a meadow, a man in re-enactment gear and a photo of soldiers working on a cannon. I blended them into one photo. Then I added extra fog to give it a smokey look.

I do think the wording is a bit crowded though at the bottom.

Posted by TirzahLaughs at 5:10 PM No comments:

Final KNoxville Cover Front and back

Posted by TirzahLaughs at 9:53 PM No comments:

INK
Posted by TirzahLaughs at 7:37 PM No comments:

Thinking about Xmas---and not buying gifts


It's almost the holiday season and no matter what secular or religious following you are a member of, you're probably going to have to Christmas shop (or Holiday shop depending on where you are).

I think this year, we should call off the shopping. I think we should shop in our houses instead.

I have lots of 'junk', I'd love to relocate. I have that brand new water purifyer I have never used and entire box of fruit scented soaps (they smell great but hey I'm allergic). Why can't we all agree to gift from our closets rather than our wallets?

Anyone want my DVD of Music and Lyrics? I love that movie. Yeah I have a weakness for all things Drew Barrymore. Sigh.

And think if your kids exchanged their toys for their cousins toys? Nirvana.

And we'd all cut our Christmas costs in half.

Hmm...I do admit I'm cheap but honestly how many of you actually get things you'd use for Christmas? I rarely do. I say let's cut out the middle man. I'll give you my junk I think you'll like and you give me your junk you think I'd like.

And Edie, I know about your entire closet full of discarded throw pillows. Time to start wrapping the fluff. :) I want the pasha blue ones with the shiny gold stitches.
Posted by TirzahLaughs at 5:27 PM No comments:

This is the second half of the Ms. U's 5th grade class book covers. They all completed NANO and now get a book cover.

Blurb: She wants to live a normal life, but her grandparents get killed and she has to take revenge, with the help of a male friend, to get revenge.

Blurb: Austin finds a cave in his new town and wants to become a dragon. He enters and goes on a journey with a red and green dragon to defeat the Mighty Dragon and find an emerald

Blurb: A dragon asks Shiron to help get the Dragon Gem back from an evil man.

Blurb: Lizzie’s mother left her and her brother. She gets a letter saying she has to save the oceans and her dad.

Blurb: Two sorcerers guard a laptop that is a powerful gem. The MC, Trevor, goes on a quest to get it back but in the end it is destroyed and the sorcerers become mortal again

Blurb: She trusts the wrong person and gets stuck in a different world (forest world) with her enemy a boy named Austin. They have to work together to escape.

Blurb: She is sent to a boarding school in England and gets involved with a mean girl who is out to make her year miserable. MC enters a horse race that the other girl is in, too.

Blurb: She finds out she is an angel, but she doesn’t want to be. She defeats an evil villain

Blurb: Disease has swept the world, killing everyone 13 and older. Craig and his siblings need to get food and water to survive. Mean boy steals their food and destroys their house. In the end, Craig triumphs.

Blurb: Joe wants a new video game, but Mom won’t buy it because it’s expensive. He does chores to earn the money.

Blurb: She gets a message on her green emerald necklace that tells her to capture an evil lady who is trying to find a valuable treasure. MC discovers a power to freeze things that she uses to beat the enemy.

Blurb: MC goes into a graveyard to find his ancestor’s name on a gravestone. A ghost (Civil War cavalry officer on horse) appears that ends up being his ancestor.

Blurb: Prince goes on a journey to find a sword protected by a dragon and a wizard.

Blurb: The mouse and her sister want to escape from the girl who kidnapped them. The girl and her cat prevent them.

Blurb: MC and his brother and a friend race moto cross motorcycles. A series of accidents tests their friendship.

Blurb: He goes to spy on a rival gang leader in a secret warehouse. He has a hoverboard and a laser gun.

Blurb: The love of his life dies of a mysterious illness and he goes on a quest to find out what it is. Leaves the city to go to a jungle.

Blurb: MC is caught in Gamis Fief during an attempted takeover. He is pursued by a group of soldiers led by a Vampire Hunter.
Posted by TirzahLaughs at 12:42 PM No comments:

Ms. U's class completed NANO this year. I'm creating a book cover for each student. I'm including the book cover and the blurb of the book.

To see the second half of the covers, click the link below:

Book Blurb: Tahoma lives with her mother and younger sister in a jungle/forest/savannah about 100 years in the future. Her sister becomes ill and must go to the city for a cure. Mother doesn’t allow it, so Tahoma sneaks off with the help of her cousin and a man she learns is her father, gets the medicine and comes home.

BOOK BLURB: Skye, her cousin, and her friend want to find a magical bracelet that was stolen from the friend. Then they try to steal it back. The thief gives it back and later the friends find out why.

Book Blurb: Yumi wants to find her long lost brother who has been hypnotized to follow Akuma’s orders.
---------

Book Blurb: The boy's family is killed, and all the people in L.A. he and a friend search for the murderer. In the process, they acquire dragons to help them.

Book Blurb: Danny wants to collect forest ingredients to give his mother life, but the evil overlord shows up with his son. Can he save her?

Book Blurb: Nico has to retrieve the black stone of eternity or else...

Book Blurb: Dominic wants to save his grandpa’s life by getting the Emerald of Life. Dragons guard it, but he and his friend defeat them and make grandpa healthy.

Book Blurb: Toshiro wants to gain great honor but he doesn’t want his friends to die in Chin Ling’s trap.

Book blurb: Rei moves from Japan to San Francisco and meets Lani, a beautiful girl trapped in a curse, and Saeko, a boy who can change into a cat. They go on a quest to free Lani.

Blurb: Nick wanted to be the best wizard ever, but kept getting attacked by another boy during training. Later he discovers that boy is his brother and they are reunited.

Blurb: Macy’s father dies and she moves to her grandparent’s and a new school. Another girl sabotages Macy’s part in a play by putting pepper in her water so she can’t sing.

Book Blurb: Eliza finds a letter in her grandmother’s attic that sends her on a quest to save her town from an evil overlord who has cursed it. She discovers the overlord is her long lost father.

Blurb: She wants to save her brother, but Frankie was in her way. A wind spirit helps her make the right choices.
Posted by TirzahLaughs at 12:55 AM No comments:

Get a Custom Cover Cheap